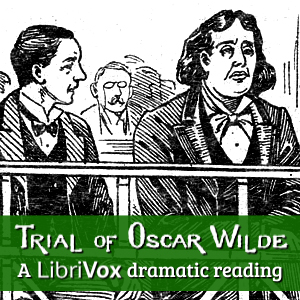 LibriVox recording of The Trial of Oscar Wilde (Dramatic Reading) by Anonymous.

In 1895 Oscar Wilde was convicted of gross indecency and sentenced to two years' hard labor. This account of his two trials was compiled from the original shorthand court reports by an anonymous author. While a more complete account of the trial was published several years later, it omitted the more 'sensational' exchanges. This shorter version was clearly intended for a more prurient reader. In it we hear Wilde's famous defence of "the love that dare not speak its name", and see the evidence mount as a succession of attractive young men step into the witness box to tell their tales. - Summary by Rob Marland

Reviewer: BixLives - favoritefavorite - August 23, 2019
Subject: SKIP to # 4. Misleading Title
This is not an exclusive transcript of the trial but much of it seems to be biased practical criticism. Only Part 4 seems to accurately represent the trial transcript. STILL, there is no dramatisation to help frame the context.

While much of this does come from trial transcripts, more of it does not. Bad show, indeed.

High falutin sounding copy "posing" as practical criticism is not the thing for which I was looking.

Why can not the BBC produce a simple radio drama closely based on the transcripts of Mr. Wilde's trials with Queensbury as the wiley protagonist (via Queensbury's solicitor. Queensbury, omn his own, hadn't the sense that G-d dave geese.).. "QUEENsbury". A bad pun upon which G-d inflicted the hated, vicious Marquis of Queensbury.
Oscar Wilde, in 2018, finally deserves HIS day in court! After over 100 years of analysing, it is time for modern people to finally hear exactly what happened in the Old Bailey trial that resulted in Mr. Wilde being tortured to death via "hard labour". Not even harden criminals were punished as severely as Oscar Wilde and others under the old English sodomy laws (not repealed until the late 1960s); —it was only because that Wilde was still relatively young and in sound shape that he survived for another 2 painful years. He died because of an extremely painful inner ear infection suffered from the cruel "hard labour" of the 19th century, primitive British penal system.

While academia seems to have finally forgiven Mr. Wilde, the whole of society has NOT. It is finally time for the fresh air of TRUTH to reach the ears of The English People. Oscar Fingal O'Flahertie Wills Wilde was simply GAY. He was not evil, not a criminal. It is high time that a serious drama reflecting the truth of his life be produced.

Are you listening BBC??

Uploaded by librivoxbooks on January 7, 2016